Among the greatest monuments of Greek Antiquity, the famous theatre at the Asklepieion of Epidaurus, the finest and most renowned of its kind, combines perfect acoustics with elegance and symmetrical proportions, qualities praised already in the second century AD by traveller and geographer Pausanias. During the overall construction of the Asklepios sanctuary, the theatre was built on the west side at the end of the classical era, in 340-330 BC. Until the third century AD, it hosted music, song and drama competitions during the Asklepian games taking place every four years in spring, after the Isthmia celebration, as well as drama performances in the worship of Asklepios. In the peaceful hinterland of Epidaurus, with its mild climate and abundant mineral springs, is the sanctuary of the god-physician Asklepios, the most famous healing centre of the Greek and Roman world. It is considered the birthplace of medicine and is thought to have had more than two hundred dependent spas in the eastern Mediterranean. Its monuments, true masterpieces of ancient Greek art, are a precious testimony to the practice of medicine in antiquity. Indeed they illustrate the development of medicine from the time when healing depended solely on the god until systematic description of cases and the gradual accumulation of knowledge and experience turned it into a science.

This particular tour is one of the best excursions that traveller can have.
By living this experience you have the possibility to see the most in less time.
Starting from your hotel early in the morning we drive to the south direction Peloponnese. After 1h driving we stop for a coffee and shoot same fotos over the Chanel of Corinth where the sea divides central Greece from Peloponnese. After this quick stop (20 min) we drive to east in Peloponnese and after 1h & 15min we are able to admire the magnificent and word well known Theater of Epidaurus. The visit and the possible performances will take approx 1,5h. Then after 20 min driving we enter the city of Nafplio where we have a 2h free time for a walking tour in the old city. Next after driving another 20 min, we are ready to visit the Archaeological Site and the excavations of one of the oldest (if not the oldest) civilizations of the world, Mycenae. The visit in the site will take 1h and we are ready for our way back to Athens. 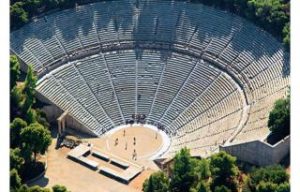 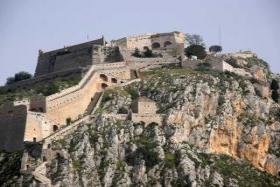 A special place, mysterious, blessed, full of natural beauty and culture, for centuries, continues to flourish and charms every visitor who without understanding, was initiated in the Beauty, Harmony, and in front of that dream become a reality. The place is authentic and that’s the magic of the search of every wayfarer he will visit Nafplion. The son of Poseidon, Nafplio, built by giving his name and memory was the first link in the chain of great cultural history, which does not reach the 999 stairs of the Castle Palamidi to the count. The Naples of the Orient “as they called the Venetian naval, stretched its roots, with respect to the historiC city and the current Nafplion, first capital of Greece in 1828, with the arrival of Kapodistrias still decorated with all the traditional elements , untouched by time. The reference point of the city, Bourtzi continues to keep alive the legends, polyfotismeni presence in the Gulf of Argos, built on the small island of St. Theodore.The fort of Palamidia, which has been preserved in excellent condition, is one of the greatest achievements of Venetian fortification architecture. The hill of Palamidi, which takes its name from the Homeric hero Palamidi, does not seem to have been systematically fortified until the second Venetian occupation. The construction of the fort was basically carried out during the time of Venetian General Superintendent of the Fleet, Agostino Sagredo, from 1711 to 1714, marking the fort not only as a major feat in terms of its fortifications, but also in terms of the speed with which it was constructed. 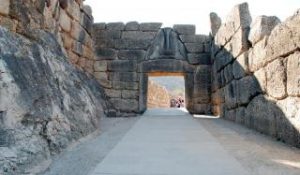 Mycenae ‘Rich in Gold’, the kingdom of mythical Agamemnon, first sung by Homer in his epics, is the most important and richest palatial centre of the Late Bronze Age in Greece (~7000 B.C). Its name was given to one of the greatest civilizations of Greek prehistory, the Mycenaean civilization, while the myths related to its history have inspired poets and writers over many centuries, from the Homeric epics and the great tragedies of the Classical period to contemporary literary and artistic creation. The archaeological site of Mycenae comprises the fortified acropolis and surrounding funerary and habitation sites, which are located mainly to its west and southwest. Most of the visible monuments date to the centre’s great floruit, from 1350 to 1200 BC. Great Cyclopean walls surround the almost triangular acropolis, which is accessed from the northwest through the famous Lion Gate, the symbol of the Mycenaean rulers’ power. The gate was named after the two opposing lions carved in relief and set into the relieving triangle, a typical feature of Mycenaean architecture, over the door.