A few words about Delphi

At the foot of Mount Parnassos, within the angle formed by the twin rocks of the Phaedriades, lies the Pan-Hellenic sanctuary of Delphi, which had the most famous oracle of ancient Greece. Delphi was regarded as the centre of the world. According to mythology, it is here that the two eagles sent out by Zeus from the ends of the universe to find the navel of the world met. The earliest finds in the area of Delphi, which date to the Neolithic period (4000 BC), come from the Korykeion Andron, a cave on Parnassos, where the first rituals took place. The remains of a Mycenaean settlement and cemetery were discovered within the sanctuary. Between the sixth and fourth centuries BC, the Delphic oracle, which was regarded as the most trustworthy, was at its peak. It was delivered by the Pythia, the priestess, and interpreted by the priests of Apollo. The archaeological site of Delphi includes two sanctuaries, dedicated to Apollo and Athena, and other buildings, mostly intended for sports. Visitors arriving from Athens first encountered the sanctuary of Athena Pronaia. To the northwest of the sanctuary of Athena Pronaia lay the gymnasium, a place for exercise and learning, the palaestra and the baths. Further up the slope was the Castalian spring, the sacred spring of Delphi, were travellers quenched their thirst after a long voyage and purified themselves before consulting the oracle. The central, most important part of the site was the sanctuary of Apollo, which was surrounded by the usual peribolos, or enclosure wall, with a main gate at its southeast corner.

This private tour to Delphi starts from your hotel early in the morning (08.00 – 08.30 am) and lasts approx 9-10 hours. The whole driving from Athens to Delphi is about 3 hours. Our first stop for a coffee or a snack will be after 1,5 hours. Then we approach the traditional village of Arahova and after 0,5 hour driving we arrive to Delphi. We visit the Museum and then the Archaeological Site of Delphi which will take approx 2 hours. After visiting Delphi, we make a stop for lunch in one of the traditional tavernas, on our way back to Athens. 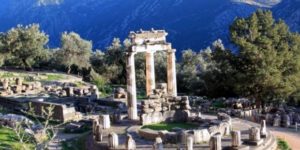