A few words about the site of Ancient Olympia

Olympia, one of the most important archaeological sites in Greece, was in ancient times the most important religious and athletic center, an institution with nationwide radiation and glory from antiquity to today. Its fame rests upon the Olympic Games, the Olympics, which were held every four years in honor of Zeus, in classical times, comparable in importance to the Pythian Games, held in Delphi. In Olympia was the gold and ivory statue of Zeus, made by Pheidias, which was known in antiquity as one of the 7 wonders of the world.
In the Archaeological Museum is the statue of Hermes of Praxiteles, one of the most important exhibits of the museum. God rests on a tree trunk. In his left hand, the little Dionysus. The Greek beauty, balance, art. During Roman times, the statue had interventions when transferred to Iron. Today, the museum of Olympia, except Mercury, there are findings from excavations in the sacred area of ​​the Altis. Exhibits from prehistoric times to early Christian times, the most important reports of the sculptures, home and chariot race of Pelops and Oenomaus and the Winged Victory of Paionios.
The ancient stadium has taken the form, we see today, in the early 5th century. BC, when the great temple of Zeus was built . In antiquity, southern of the stadium was the hippodrome .
The Sanctuary of Zeus, father of the gods, temples and buildings directly related to worship, but also buildings for hospitality for the Olympic Games: sports facilities, auxiliary buildings, utilitarian and administrative, but also secular buildings. A central part of the Altis, the sacred grove, where was developing the core of the sanctuary.
In the same area there are buildings, bath complexes and villas, such as the famous mansion built by Nero when he lived in Olympia to take part in the games. When Christianity became the official religion of the Roman Empire, the Olympic Games gradually lost their importance after longer regarded as a pagan celebration. Finally, in 393 AD Emperor Theodosius prohibited the conduction of the games. Since then Ancient Olympia never lived again grandeur and glamor,by beeing the center of the organization the Olympic Games. On August 18th 2004, the ancient stadium of Olympia lived again moments of glory, after 1611 years, and hosted the shot put event of  men and women in the context of the modern Olympic Games in Athens.

Early in the morning we drive direction southern Peloponnese and our first stop after approx. 1.5 hour is the canal of Corinth for a coffee brake and shoot some photos of the amazing construction of the canal.
After this quick pause, we continue our tour direction to Messinia and circa after 2 hours we stop in a small village in the south western coast of Peloponnese, for a typical Greek lunch. If you desire swimming, is also possible there and our destination is not far from there.
In the evening we check in the hotel where we are going to overnight.
Free time to walk along the beautiful alleys of the town of Olympia for a drink or a dinner.
Next day, after breakfast, you are ready to admire the ancient beauty by visiting the Archaeological site and museum of Ancient Olympia.
Guiding visit, takes about 2,5 hours.
Lunch will be taken place either in the village or on our way back to Athens.
An alternative, for nearly the same tour is to combine it with another destination, like Mycenae.
Such a choise requires direct driving from Athens to Olympia in order to visit the site the same day, overnight in Olympia and next day drive to Mycenae – Nafplio. 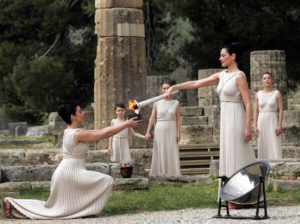